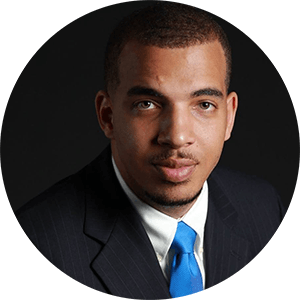 Michael A. Gilmore, Esq. is a Detroit native, who graduated from Cass Technical High School, Wayne State University (B.A. Economics), and University of Detroit Mercy School of Law. In his most recent role as Deputy General Counsel, Michael counseled a national super PAC and non-profit conglomerate on laws surrounding voting rights and elections. Prior to his current role, he served as Michigan Regional Field Director at For Our Future Action Fund, organizing activists throughout Wayne County, MI. Similarly, Michael served as a Regional Organizing Director for the Democratic National Committee, overseeing ballot recount initiatives for Wayne County during the 2016 Presidential Election. As a field organizer for the Democratic Party's grassroots effort on the 2016 presidential campaign, he organized volunteers to register over 1,000 voters including college students, homeless Americans and new voters in southeast Michigan. Michael worked on staff to U.S. Senator Debbie Stabenow in Washington, D.C., where he took an active role in listening to the concerns of constituents and organizations from across the state. While working for a law firm/non-profit partnership between Brooks Kushman P.C. and Challenge Detroit, Michael consulted for local non-profit organizations, including work leading to a $570,000 grant from the Kellogg Foundation that benefited southeast Michigan. He has led community service efforts across the region, launching partnerships with local community organizations such as the Coalition on Temporary Shelter (COTS), One Hundred Houses, and United Way of Metro Detroit. As a pro bono legal advocate at Project Salute, a veterans legal clinic in downtown Detroit, Michael fought the Veterans Administration on behalf of homeless veterans across the Midwest who were wrongfully denied benefits earned in service. Believing that higher education should be available to every student, regardless of income, Michael has raised over $100,000 toward student scholarships and improving educational programs at his alma mater Wayne State University.