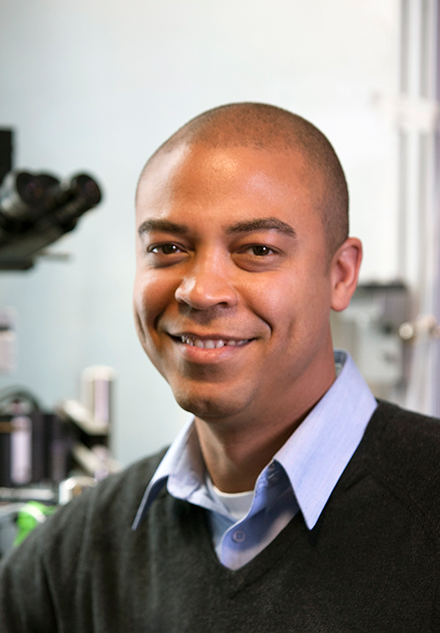 Imagine beyond what you think is possible, and then have the courage to go for it! And take inspiration from amazing people that are already present in your life.

What IC do you work for?

The National Institute of Neurological Disorders and Stroke (NINDS)

How many years have you worked at the NIH?

I first heard about the NIH intramural program from a professor in my graduate school department. I learned that NIH offered a unique research environment and strong support for researchers across different career stages. When I entered the job market, I was lucky to land an interview at NIH and hear first hand from accomplished researchers from wide variety of disciplines.

I am an Investigator at the National Institute of Neurological Disorders and Stroke. I am the head of a research laboratory that focuses on understanding the cellular physiology and circuit organization of neurons of the dopamine system.

What message would you like to send to young Blacks who are considering going to college?

I would encourage young students to earn absolutely the best grades that they can. In doing so, however, my advice is to master the ideas and principles of the courses rather than just memorizing the facts. After you have learned the principles, then question those principles. Ask yourself whether you think those ideas stand on solid ground and be able to explain why.

Why did you choose to pursue a career in research?

Pursuing a career science was a very natural decision for me, but it was also one that I made gradually over time. As a young student, science and math were always my favorite subjects but they were not my only interests. I also played the violin starting from grade school throughout college and it was a major part of my identity early on as well. In terms of my career choice, however, working as a postbaccalaureate fellow in an atomic physics lab after college was a critical experience for me. Although I eventually switched to neuroscience, my experience doing experimental science in physics and seeing how these scientists lived on a daily basis convinced me that it was the perfect career for me. I loved the challenge of experimental science but also the creativity and independence that it allowed. It was an obvious choice for me.

What would you say is your most significant contribution to science or medicine?

My goal as a scientist has been to uncover principles of how individual neurons generate the electrical signaling activity, also known as action potentials, that enables cell-to-cell communication in brain circuits. Specifically, I study ion channels which are a diverse class of transmembrane proteins that control the timing and pattern of action potential firing within single neurons. Pharmacological drugs that target specific ion channels can be used as treatments to control epilepsy, to limit cardiovascular disease as well as other diseases. My work has contributed to our understanding of how specific ion channels interact to produce firing in neurons specifically located in reward and motor systems.

Regarding your career here at NIH, what accomplishment are you the most proud of?

Starting an independent research lab is an incredibly difficult challenge that requires a broad range of scientific and non-scientific skills. Lab heads are not only scientists, but we are also managers, public speakers, writers, motivators, and many other things as well. I am proud that I was able to launch my lab and and get it rolling in the right direction.