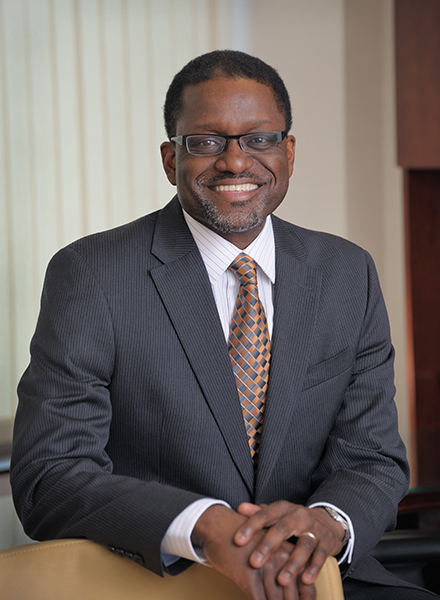 Faith, passion, purpose, persistence toward a positive impact on the people who cross my life path.

What IC do you work for?

How many years have you worked at the NIH?

Answered a call to public service with a scale of scientific and public health impact, not generally achievable in a typical academic setting.

I am the Director of the National Heart, Lung, and Blood Institute. I oversee the third largest institute at the NIH, with an annual budget of more than $3 billion and a staff of 917 federal employees.

What message would you like to send to young Blacks who are considering going to college?

I would encourage you to pursue mastery of your area of passion and live a life without limits. I have been inspired by my forebears -- my grandmother and mother -- women who were undaunted by perceived adversity and barriers.

Why did you choose to pursue a career in research?

I entered Harvard Medical School intending to be a primary care physician. However, during my first year at Harvard I asked my physiology professor, Dr. Cliff Barger, what I thought was a straightforward question: Why do African Americans have higher rates of hypertension and cardiovascular mortality? He met my question with a challenge: Why not stay in his lab and investigate the answers myself? After two years of immersive biomedical research with Dr. Barger, my career plans were irrevocably changed. From then on, I knew that the crux of my career would entail the pursuit of understanding the molecular basis of vascular diseases and the etiology of disparities in cardiovascular health.

What would you say is your most significant contribution to science or medicine?

My research in the burgeoning field of vascular biology has led to critical insights that have paved the way for novel therapeutic strategies for vascular disease. Early research from my lab led to the characterization of how angiotensin II-induced activations of molecular networks and the expression of autocrine-paracrine growth factors mediate long-term trophic effects on cardiovascular tissue structure. My finding that angiotensin II induces autocrine-paracrine expression of transforming growth factor-beta was a critical bench-to-bedside insight that led to clinical trials demonstrating the effect of angiotensin receptor blockade on aneurysm formation in patients with Marfan syndrome. I have been a driver of the emerging conceptual framework of "vascular remodeling" and the elucidation of the cellular processes and molecular mediators that govern vascular structure in health and disease. My team of investigators have developed novel experimental models of ‘in vivo genetic engineering’ that provided new insights into the causal mediators of vascular remodeling as well as providing ‘proof-of-concept’ validation of targets for a new generation of molecular therapies designed to treat vascular diseases. I have been a key contributor to patented inventions that hold promise as novel therapeutic strategies for vascular disease.

Regarding your career here at NIH, what accomplishment are you the most proud of?

I have initiated several major transformations that have strengthened and balanced the scientific portfolio, engaged stakeholders in setting the Institute’s research agenda, developed systems for operational excellence, and enhanced strategies to maximize return on investment of research while ensuring accountable stewardship of the public’s resources. Two examples stand out: I have steadily increased the funding of R01s to one of the highest R01 success rates at the NIH. I also led an unprecedented Strategic Visioning effort which established approximately 132 high-priority ideas for the NHLBI to pursue over the next 5 to 10 years. The NHLBI Strategic Vision charts a future that exploits emerging disciplines and new tools and technologies in computation, imaging, and high throughput ‘omic’ analytics to further the understanding of normal biology, pathobiology, individual and population differences, precision medicine, data science, novel therapeutics and diagnostics, and workforce development.