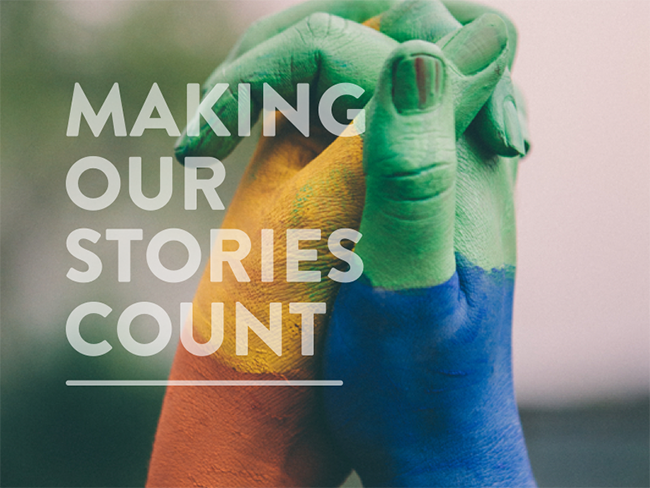 Light refreshments will be served.

Special thanks to the co-sponsoring Sexual and Gender Minority Research Office.

Watch the Telling Our Stories Project

Elliot Kennedy is the Senior Advisor for LGBT Health in the Office of the Assistant Secretary for Health at the U.S. Department of Health and Human Services (HHS). In this role, he serves as the Departmental lead and liaison for LGBT issues and helps support the work of the HHS LGBT Issues Coordinating Committee. He was previously the Special Expert for LGBT Affairs at the Substance Abuse and Mental Health Services Administration (SAMHSA), where his work focused on planning and coordinating LGBT policy and programmatic initiatives, integrating LGBT cultural competency throughout the agency, and staffing the LGBT Issues Coordinating Committee.

Prior to joining HHS, Kennedy was Government Affairs Counsel at The Trevor Project, where he advocated for laws and regulations that support LGBTQ youth and young adult mental health. Among other areas, his work focused on increasing access to mental health services, building safe and supportive educational environments, and ending youth homelessness.

JoAnne Keatley received a Master of Social Welfare degree from the University of California, Berkeley. At UCSF from 1999 to 2016 she directed the Center of Excellence for Transgender Health, a capacity building and technical assistance center, was also the Co-Investigator on the new HRSA SPNS-Transgender Evaluation and Technical Assistance (TETAC) Project. Currently JoAnne is working to develop the IRGT, a global network advocating for trans issues in the international HIV response while promoting trans people's health and human rights. During the last decade she has directed multiple federally funded research and HIV prevention projects and has consulted on transgender health at the NIH, CDC, HRSA, SAMHSA and at the White House. JoAnne has received numerous awards and recognition including the first staff recipient of the UCSF Chancellor's Award for LGBT Leadership and in 2009 the UCSF Martin Luther King Jr. Staff Award for advancing cultural diversity and social justice on campus. In 2011, she was honored by Kaiser Permanente with the National HIV/AIDS Diversity Award.

Inspired by living in New York City as a law student through the 9/11 attacks, Ms. Chandler started her national security career in 2004 as an intelligence analyst at the Office of Naval Intelligence (ONI). From 2004 to 2016, she served in roles of increasing responsibility, culminating with her service as Division Chief from 2011-16. In that capacity, she led the Intelligence Community’s analytic effort against arms smuggling and the proliferation of WMD by sea. In 2006 she was the first employee ever to complete a gender transition at ONI.

She is the representative of the Office of the Under Secretary of Defense for Intelligence to the Intelligence Community Pride employee resource group, and she is a member of the Truman National Security Project Defense Council. From 2008 – 2013, she also served on the Board of Directors of Whitman Walker Health, including as Vice Chair. She has published in the Washington Post, appeared on NPR’s Weekend Edition, and spoken at academic, community and corporate forums about her story and her perspectives on leadership and communication. Ms. Chandler is a graduate of Brown University with a B.A. in International Relations, and received her law degree from Brooklyn Law School. She is married to Catherine Chandler, her partner of 22 years, with whom she has two young sons.

Mahri Monson works at the U.S. Environmental Protection Agency (EPA) in the Office of General Counsel. She started with the EPA in 2008 as a Presidential Management Fellow and has worked in EPA’s Office of Enforcement and Compliance Assurance, the Pacific Islands Office in EPA Region 9 (San Francisco), EPA’s Office of Water, and the White House Council on Environmental Quality. Mahri is championing and leading a pilot for EPA to gather voluntary, self-disclosed sexual orientation and gender identity workforce data in order to increase and improve tools for assessing equal employment opportunity and diversity and inclusion efforts at EPA. She is also the Vice-Chair of EPA's Lesbian, Gay, Bisexual, and Transgender (LGBT) Advisory Council and over the past 8 years, she has advocated for LGBT workplace equality and inclusion at EPA, including pushing for a transgender and gender non-conforming employment policy and helping to develop and deliver LGBT 101 trainings. Mahri has a BS in Environmental Science and a BA in Spanish from the University of North Carolina at Asheville, and an MS in Science, Technology and Environmental Policy from the University of Minnesota’s Humphrey Institute of Public Affairs.

Results-driven health care policy and management professional with a proven ability to strategically set and achieve organizational goals and solve problems as they arise. Passionate about improving access to health care for all people, including children and youth, and developing future leaders to serve in social justice movements. Works effectively with diverse groups of people at every level and is committed to achieving results through collaborative management, creative use of limited resources, and strong integrity and work ethic. Thrives in fast-paced, high-pressure environments that require clear communication, fast yet accurate review of information, and quick decision-making.

Ann-Sofie is a social justice organizer and strategist based in Cairo. She has been working with movements in the Middle East, Europe, USA and West Africa for over a decade. Ann-Sofie spent 2 and a half years creating global connections for activists at ActionAid. Before that she was the co-founder of The Middle East Expedition that facilitated youth driven creative projects in politics in the Middle East before the Arab Spring. She is currently working with the World Bank in Cairo. She has a Masters in International Development and Business Studies from Roskilde University.