A Sexual and Gender Minorities Panel: What Brings Us Here - Experiences and Perspectives from Across the NIH

A Sexual and Gender Minorities Panel: What Brings Us Here - Experiences and Perspectives from Across the NIH 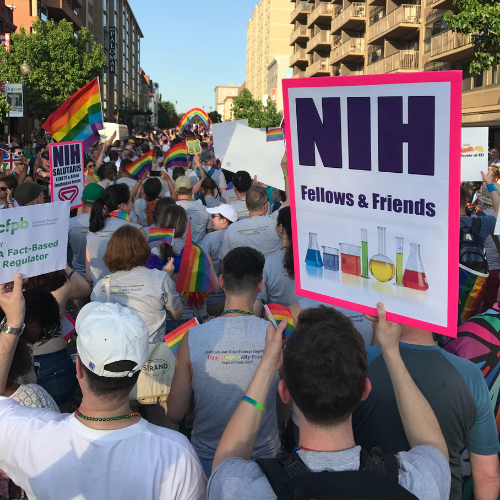 This panel offers members of diverse communities under the LGBTQ+ umbrella the opportunity to speak about their experiences here at the NIH and to talk about their efforts in increasing diversity in the NIH workplace, how the NIH has changed over time around LGBTQ+ issues, and what minority communities hope for in the future.

Gemma Martin is a postbaccalaureate researcher in the laboratory of Dr. Matthew Hoffman of NIDCR. Their work is on elucidating the role of neurotrophin signaling on the development of salivary gland myoepithelial cells. Gemma received their BS in Biology from Shenandoah University in Winchester, Virginia. They have a passion for LGBTQ+, mental health, and accessibility advocacy in STEM. Gemma has also been a member of the Sexual and Gender Minority Engagement Committee and involved in SafeZone training through the office of Equity Diversity and Inclusion. They are starting their PhD in Biomedical Sciences at the University of Colorado Anschutz Campus in Aurora, Colorado. They plan on using their laboratory rotations to narrow down their options within the field of cell and developmental biology for their thesis work. Additionally, they will continue their advocacy work in Colorado in addition to science communication outreach in the local education systems to get younger folks excited about science.

Dr. Erik J. Rodriquez is a biobehavioral epidemiologist and staff scientist in the Division of Intramural Research at the National Heart, Lung, and Blood Institute where he conducts population health research in the Minority Health and Health Disparities Population Laboratory. He specializes in tobacco use behaviors, social determinants of health behaviors, and behavior-related health disparities among racial/ethnic minority and immigrant populations. His past research has investigated relationships between acculturation-, stress-, mental health-, and age-related factors and health behavior. His experience also includes research in the fields of premature mortality, occupational health, and applied public health. Dr. Rodriquez received his M.P.H. degree from Loma Linda University; postgraduate training from the California Department of Public Health; his Ph.D. from the University of California, Davis; and postdoctoral training from the University of California, San Francisco.

Dr. Tam Vo is a Postdoctoral Researcher in Natasha Caplen’s group at the NCI. He currently works on understanding the interactions between proteins and nascent RNA in Ewing Sarcoma pediatric cancer. His graduate research focused on the rational binding mechanisms of transcription factor proteins and their target gene site and drug development for various diseases, including pancreatic cancer. Outside of the bench, Tam is actively involved in the NIH Fellow community. He is the Co-Chair of the NIH Science Policy Discussion Group, a Fellow-led organization that gathers like-minded scientists and early career researchers who are interested in the interaction between science and policy. Tam received his PhD in Biophysical Chemistry from Georgia State University and BS in Chemistry from Mississippi State University.

Michael has a background prior to the federal government in pharmaceutical and durable goods manufacturing engineering, information technology in addition to distinction as a military veteran. He began his civilian federal career as an NIH Administrative Fellow and has a current role at NHGRI as budget analyst in the Division of Intramural Research encompassing all phases of the budget cycle as well as ancillary roles in contract and administrative management. Michael also serves on NHGRI’s Inclusion Taskforce. In prior civic work Michael has served in a variety of non-profit volunteer roles including as a board director, specifically addressing HIV/AIDS in the African American community. Michael has a BS in Industrial Engineering from North Carolina A&T State University and a Masters of Public Administration from Virginia Commonwealth University.