Black and (LGBTQIA+) Proud: Conversation on the Intersectional Relevance of the Annual DC Black Pride Celebration

Black and (LGBTQIA+) Proud: Conversation on the Intersectional Relevance of the Annual DC Black Pride Celebration 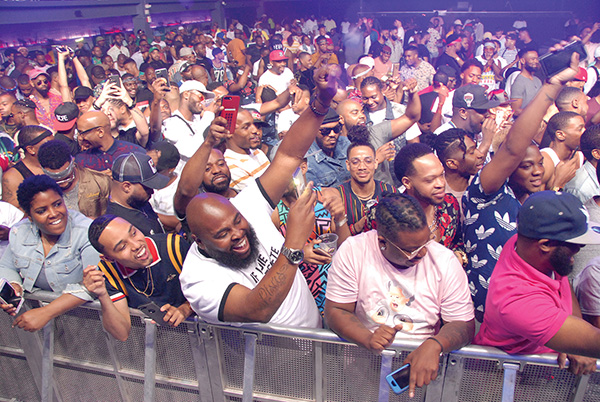 As the Strategist for the Sexual and Gender Minority Portfolio, I find it crucial to offer members of diverse communities under the LGBTQIA+ umbrella the opportunity to speak about our experiences here at NIH and to talk about our efforts in increasing diversity in our workplace. Because the LGBTQIA+ community is not homogenous, the varied experiences and perspectives make a more interesting conversation. These different voices and perspectives are shaped by the diverse lived experiences of the NIH community.

With an analytical background in technology, budgeting, engineering, and the social sciences, Michael Wilkerson works as a Program Specialist in the National Human Genome Research Institute’s (NHGRI) Intramural Administrative Management Branch where he effectively examines contemporary organizations, systems, and processes. He aims to work more closely on matters that connect public funding policy more deeply to the needs of diverse populations and the global community. The following piece is written in interview format wherein I ask questions and Michael Wilkerson responds.

Bali: Tell me about DC Black Pride. What’s it like?

Michael: DC Black Pride has changed over the years. I don’t think it is much different than the other Black Pride Celebrations across the country (Los Angeles, Houston, Atlanta, etc). Generally, it is largely for the 20–40-year-old crowd, so I have aged out. They do the night club circuit, pool parties, pageants, cookouts, and, of course, making new friends from other cities to visit. It has come to my attention that Black Pride across the country has become nimbler during the pandemic with the advent of more intimate and intentional community building through organizations such as Native Son founded by Emil Wilbekin.

Bali: Do you remember the first time you attended/participated?

Michael: I do remember the first time. I was 27, living in New Jersey, and had recently left the military which was fairly repressive during don’t ask don’t tell policy years. I came down to stay with my brother in Maryland and he invited me into DC. Having graduated from a historically Black college, I was no stranger to being among a sea of Black humanity gathered for a purpose, however, I had never seen so many Black same-gender loving men in one place in my life. The city was electric, and it felt very uplifting. DC was not gentrified at that point, so I was able to meet Black men who actually lived in and around the more central areas of the city. For the first time, I was able to meet an older Black couple in their 70s living as would any heterosexual married couple. It gave me hope.

Bali: How is it different from the regular Pride here in DC?

Michael: First, I would not call the larger DC Pride “regular Pride.” I do understand why one might call it regular Pride, given the segregated communities within the gay community. Unlike Black Pride, the city largely welcomes the larger DC Pride with fanfare and parades just as it happens in places like Atlanta. It has lots of sponsors and the Black men and women are out and about as well even though Black gay culture is largely absent. The ways in which we in the Black gay community wear our clothing, the type of music and dance, the actual spiritual embodiment of the event…the larger DC Pride is all fairly void of African American culture and African American gay culture. New York is the only city I am aware of that blends its Pride celebration with considerable diverse flair making it more welcoming than most cities. It even coincides with Harlem Pride during the same dates on the calendar whereas all other Black Pride cities separate the dates.

Bali: We’ve discussed labels before. How does your identity differ from the larger “gay” community?

Michael: As I mentioned previously, I feel I have aged out of the “scene” as it were. Dating is more complex when one intends on building a family and a life of permanence. Gay is largely synonymous with the youth culture as people go about creating lives for themselves and do things most young people do. It can be quite messy “growing up” in the community. I prefer to recognize myself as same-gender loving.

Bali: Why is it so important to make that distinction?

Michael: It is very important to me to make a distinction because it helps others to quickly understand what I expect from a social life whether for dating or friendship. The gay community can be quite transient by the nature of the youth culture. I have and seek more stability in relationships.

Bali: How long have you worked at NIH?

Bali: Please describe your experience at NIH as a Black man.

Michael: My experience has been mostly very good. This may be because I have worked with many women, and they are far more accepting of any perceived difference with men. They are less judgmental. I have also worked for a transgender woman. My opinion is that women are okay with you if you do not lie to them. When you present who you are, they get it.

Bali: What changes—improvements, regressions—have you seen in your time here?

Michael: There have been tremors of a shift just since June 2020 after the murder of George Floyd. Up until that point I honestly was resigned to the fact that business as usual included a predetermined pecking order. Even so, there is still quite a journey ahead on that front.

Bali: What would you still like to see happen? What changes would you make (if any)?

I would love to see more Black men in positions of influence. An openly Black gay man in leadership would be nice. I know NIH used to have one several years ago in Dr. Raynard Kington, former Principal Deputy Director. Just like seeing that older Black gay couple in DC gave me hope when I was a young man, I think that level of diversity in leadership would give much hope to younger Black men by influencing them to find their careers here at NIH no matter the perceived obstacles and differences. There are 107 historically Black colleges and universities in the United States with plenty of talent that can be brought to bear in the fight against health disparities and Black individuals must see more of their community here to believe they can make a contribution (similar to how the white gay community fought to work with NIAID in the 90s to alleviate the suffering of the AIDS crisis). I know of a few high-level leaders at NIH who are white and openly part of the LGBTQIA+ community who were given the opportunity. I would say this is a necessary change worth making.