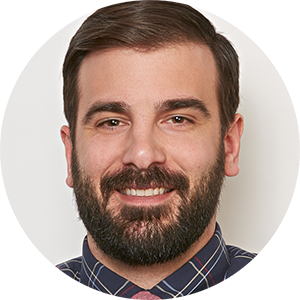 David Rice graduated in 2009 from the Catholic University of America with a degree in Psychology, with a focus on social stigmas of people with Intellectual Disabilities. He has been at National Institutes of Health (NIH) since October 2009, as a Management Analyst for the National Eye Institute (NEI) and the National Institute on Deafness and Other Communications Disorders (NIDCD). Being Deaf since the age of 3, he has a strong interest in the Disability Community. His work within the disability community started as a sophomore in high school, where he worked in summer camps for children with intellectual and physical disabilities. While in college David was part of the first American Sign Language (ASL) residential program, where students live a dorm in which hearing and Deaf students shared their desire to teach/learn ASL. He was also active in outreach for people with disabilities at Catholic University.

David is part of DIG (Deaf in Government), where he served as a policy chairperson and as the president of the organization. DIG empowers Deaf and Hard of Hearing Federal Employees to overcome communication barriers, resolve accessibility issues, and promotes a fully inclusive work environment through networking and fostering professional growth. Some of David’s accomplishments are initiating a workforce complaint program, developing a training program that fosters promotion in the federal government, establishing partnerships with different organizations, and creating networking and mentoring opportunities.

David has also changed the cultural stigma placed on people with disabilities have by changing the NIH mission statement. He led the Deaf NIH Employee Resource Group at NIH for those who are Deaf and Hard of Hearing, by working closely with the Office of Equity, Diversity, and Inclusion (EDI). David was also a part of Section 508 Advisory group whose mission is to make the internet a fully accessible environment; with his focus being on closed captions. In his spare time, David enjoys Baseball and all things Pittsburgh.