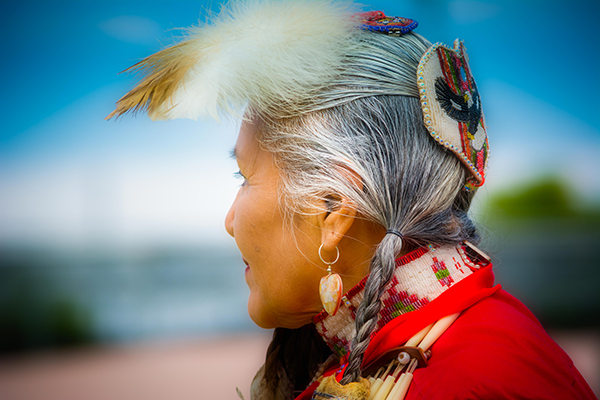 de·hu·man·i·za·tion /ˌdēˌ(h)yo͞omənəˈzāSH(ə)n/ (noun): the denial of full humanness in others and the cruelty and suffering that accompanies it.1

Indigenous Peoples2 around the world—including here in the United States—have endured unimaginable dehumanization at the hands of so-called explorers andconquistadors, religious saviors and educators, frontiersmen, and many more who may go unnamed here but are not forgotten to the annals of history and storytelling. Like the varied hands that played a part in those acts of inhumane cruelty, present-day organizations maintain and perpetuate the power structure that permits those dehumanizing acts to persist when we normalize them in our institutional language (e.g., chief; scalp(ed); “off the reservation;” “Indian giver;” powwow), behaviors (war cry mockery; “Hollywood Injun English”), or representations (wearing traditional headdresses; slogans; mascots). Indigenous people have informed us directly that they are NOT our mascots3. These acts place the overwhelming burden on our Indigenous colleagues to educate us or speak on behalf of all Indigenous people’s experiences.

I am so proud to work at the NIH in the Office of Equity, Diversity, and Inclusion (EDI) where we have heard and acknowledged the Indigenous voices holding institutions accountable to commit to eradicate all forms of racism in the federal government and advance racial equity for everyone. Consistent with advancing its journey toward racial equity, EDI has revised its institutional language for first line managers by replacing the term Branch Chief with Branch Director. By critically analyzing practices through a racial equity lens4, EDI has learned that the term chief is a word that incorrectly labels Native American men and perpetuates a similar offensive, condescending microaggression as boy does for African American men5. Furthermore, the term chief itself is incorrect and is rooted in the patriarchal paradigm of European colonists who rejected the authority and leadership of women in Indigenous communities. Indigenous leaders were never called chiefs, and decision-making roles and processes were far more complex and unique to each Indigenous nation. Therefore, calling someone chief is another way we continue to bolster a cruel structure that dehumanizes and erases Indigenous Peoples and others. I hope the rest of the NIH will join us in this effort to use more inclusive language and continue to critically examine our practices.

A wise person gifted us with a pledge to human unity when he shared that, “Injustice anywhere is a threat to justice everywhere. We are caught in an inescapable network of mutuality, tied in a single garment of destiny. Whatever affects one directly, affects all indirectly.”6 Now is the time to advocate for the advancement of racial equity.

I believe we all should advocate by committing to lifelong learning for the purpose of being increasingly effective in serving the human needs of all persons—holding the vision that we and our social institutions are instruments for creating a socially just democracy.7 Advocate by speaking up and out against hate and discrimination; advocate by reporting hate and discrimination; advocate by acknowledging and embracing our Indigenous peers’ lived realities; reject color-blind explanations toward equality and embrace racial equity; and finally, demand Indigenous Peoples be seen and accepted as human beings entitled to justice under law. I see you and the injustices you experience; I stand with you!