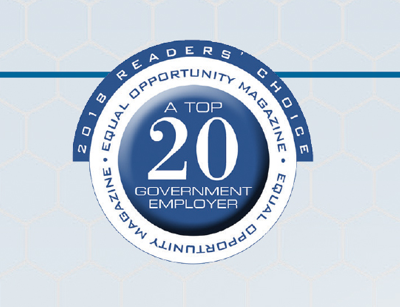 The National Institutes of Health (NIH) took the number 1 spot on the Equal Opportunity Publication’s (EOP) "Top 20 Government Employers Equal Opportunity 2018 Readers' Choice" award. Readers were asked to name the employers that they believe would provide a positive working environment for members of underrepresented groups and places that they would most like to work.

EOP has led the way from affirmative action to diversity recruitment. In 1968 EOP was formed by CEO John R. Miller and Alfred Duckett and was the nation's only interracially owned and staffed company. Alfred also collaborated with Rev. Dr. Martin Luther King, Jr. on the "I Have a Dream" speech. EOP’s first publication was the Equal Opportunity magazine, the nation's first career magazine for minority college graduates.

In 1998 The EOP created the Diversity Resume Database and hosts a diversity and inclusion website, www.eop.com, which includes EOP's Diversity & Inclusion Career Center, a job board offering many user-friendly features for both the job seekers and employers.

We are honored to receive this award. For several years, NIH has been implementing innovative ways to address diversity, and inclusion through various offices, institutes, and initiatives such as, the Office of Equity, Diversity, and Inclusion, whose mission is to cultivate a culture of inclusion where diverse talent is leveraged to advance health discovery. Other diversity offices and programs include, Scientific Workforce Diversity, Diversity Program Consortium (DPC) – our trans-NIH program funded by NIH’s Common Fund and managed by National Institute of General Medical Sciences (NIGMS), Office of Extramural Research’s (OER) Diversity in Extramural Programs, Office of Research on Women’s Health (ORWH), and the National Institute on Minority Health & Health Disparities (NIMHD). This is a monumental achievement for the NIH; having our efforts acknowledged, as well as being recognized as the top organization in the nation’s federal government that supports and endorses diversity. This confirms that we are moving in the right direction towards inclusion.