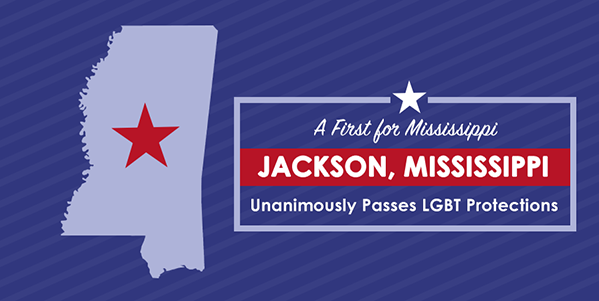 Photo by Freedom For All Americans

On June 14th, just days after the after the tragic shooting at a gay nightclub, Pulse, in Orlando, Florida, the Human Rights Campaign (HRC) Mississippi, unanimously voted to advance city-wide non-discrimination protections centered on sexual orientation and gender identity in housing, public accommodations, and employment. Due to this motion, the city’s hate crimes statute has been expanded to incorporate harder penalties for those who commit crimes driven by one’s sexual orientation and gender identity or expression.

"Discrimination and hate have no place in Jackson, and everyone, regardless of who they are, should have the legal right to feel safe in their community,"" said HRC Mississippi State Director Rob Hill. Through HRC Mississippi, progress is being made to ensure a future of fairness every day and in every aspect, with Jackson being a prototype. Jackson officials recently passed a resolution denouncing the state's Religious Liberty Accommodations Act.

Mississippi is one of 20 states that does not have crime laws clearly protecting sexual and gender minorities and does not have fully-inclusive LGBTQ non-discrimination protections. This is a sign of hope for the future of Mississippi, especially in the aftermath of the adversity in Orlando.