The NIH Office of Equity, Diversity, and Inclusion Recognizes the Historic Confirmation of Judge Ketanji Brown Jackson to the United States Supreme Court

The NIH Office of Equity, Diversity, and Inclusion Recognizes the Historic Confirmation of Judge Ketanji Brown Jackson to the United States Supreme Court 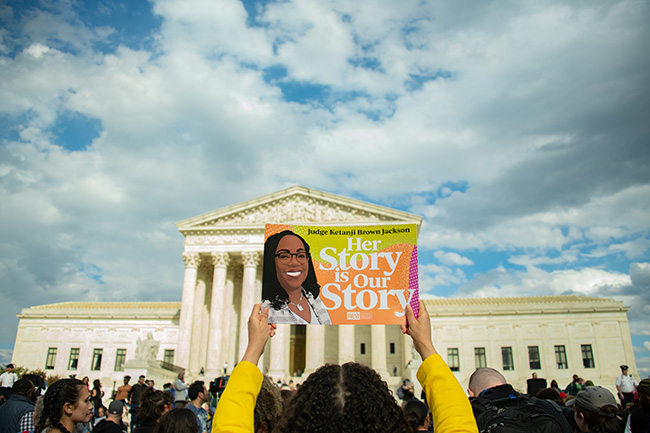 On April 7, 2022, a bipartisan group of Senators confirmed Judge Jackson's nomination to preside over the highest court in the United States of America.

As stated by the White House,

President Biden sought a candidate with exceptional credentials, unimpeachable character, and unwavering dedication to the rule of law. And the President sought an individual who is committed to equal justice under the law and who understands the profound impact that the Supreme Court’s decisions have on the lives of the American people.

That is why the President nominated Judge Ketanji Brown Jackson to serve as the next Justice on the Supreme Court. Judge Jackson is one of our nation’s brightest legal minds and has an unusual breadth of experience in our legal system, giving her the perspective to be an exceptional Justice.1

Judge Jackson is the first African American woman ever nominated and confirmed to the United States Supreme Court. On the morning of Friday, April 8, 2022, she, and Vice President Kamala Harris, the first Black, Asian, and female vice president, stood together, marking this historic occasion.

“Judge Jackson, you will inspire generations of leaders,” Harris remarked. “They will watch your confirmation hearings and read your decisions in the years to come.”2

Judge Jackson faced a rigorous nomination process marked with frequent interruptions, accusations, and curt comments about her character, ability, and willingness to be fair and impartial. “In the face of it all, Judge Jackson showed the incredible character and integrity she possesses,” Biden praised.3 “We all saw the kind of justice she’ll be: fair and impartial, thoughtful, careful, precise, brilliant, a brilliant legal mind with deep knowledge of the law and a judicial temperament, which is equally important.”4