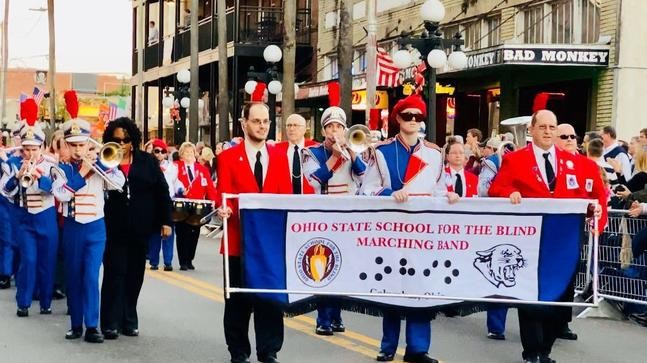 Each year, thousands of young performers from across the United States join each other at The Outback Bowl New Year's Eve Parade in celebration of the game the following day to march, dance and perform in front of 65,000 fans.

This New Year’s Eve, The Ohio State School for the Blind Marching Band (OSSBMB) led the parade and was a part of Outback Bowl’s mass band halftime performance on New Year’s Day at Raymond James Stadium.

The halftime show kicked off with performances by the two college’s (this year Minnesota Gophers and Auburn Tigers) marching band and dance teams. Following, was the mass band performance, featuring over 15 high school bands and more than 300 dancers.

OSSBMB is the only blind marching band in the world. The nationally recognized band is known for performing halftime drills at local high schools, band festivals, and parades around the country and for their ability to entertain and inspire. The members are in grades 7-12 and come from various schools across Ohio, the musicians are also guided by community volunteers.

The band was formed in 2005 when former director Carol Agler added the Band to support the Ohio School for the Deaf Football program. The Band has been honored several times with resolutions from the Ohio Senate for advancing the rights of people with disabilities to participate in all aspects of the community.

"We are excited to host this group of talented young people as part of our halftime show and New Year’s Eve Parade," Outback Bowl President/CEO Jim McVay said in a press release. "It is a great opportunity to showcase their abilities on a big stage."