The NIH Director’s Award Recipients for Equity, Diversity, and Inclusion 2019

The NIH Director’s Award Recipients for Equity, Diversity, and Inclusion 2019

The 2019 Awards Ceremony took place on Monday, July 15, 2019. Congratulations to the recipients! 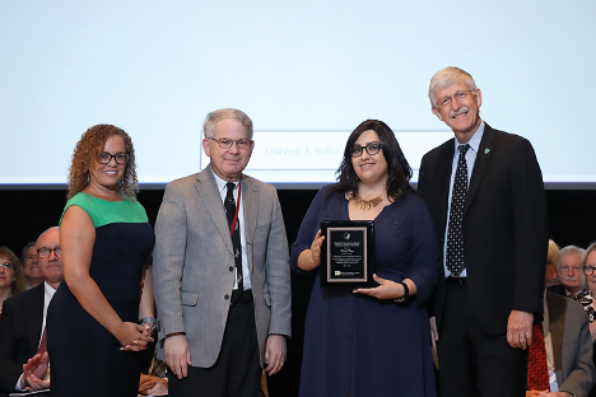 In recognition of her outstanding efforts to increase sensitivity and awareness to the needs of the SGM community to help foster workplace diversity and inclusion.

Nicole Pérez has made exceptional contributions to aid the National Cancer Institute (NCI) and the National Institutes of Health (NIH) in their goal of enhancing workplace diversity and inclusion. Ms. Pérez saw a need for greater sensitivity, awareness, and education of the experience and concerns of folks who identify as lesbian, gay, bisexual, transgender, intersex+ (LGBTI+), or broadly, sexual and gender minorities (SGM) within the NCI. She was instrumental in partnering with the NIH Office of Equity, Diversity, and Inclusion (EDI) to pilot and implement Safe Zone training at the NCI. In collaboration with EDI, and by becoming a certified Safe Zone trainer herself, Ms. Pérez tailored the program to the specific needs of the NCI workforce. Through bringing Safe Zone directly to the NCI, she has trained more than 67 staff within various administrative, scientific, and supervisory roles, which has an exponential impact on the work environment for SGM staff at large.

Like Mr. Harvey J. Bullock Jr., Ms. Pérez is committed to increasing sensitivity and raising awareness of the concerns of all NIH employees. Safe Zone participants learn about sexual and gender minority populations, identities, appropriate terminology, and the unique challenges SGM staff may face while in the workplace. At its core, Safe Zone, as facilitated by Ms. Pérez, is designed to engender a safe space for all employees through open communication, respect, curiosity, and acceptance. Ms. Pérez is thoughtful to create a safe environment in each workshop to ensure maximum engagement, so participants leave with greater awareness and tools for creating safer spaces for all NIH staff, particularly those of the SGM community. Participants have reported a greater understanding of the SGM community, of their own privilege, and a genuine desire to create a safe work environment for all. Participants have also reported feeling better equipped to quell negative situations and be more proactive in supporting SGM. Due to its success, Ms. Pérez has also modified the workshop so that it can be incorporated into other programs, such as including a custom break-out session for NCI’s The Empowered Supervisor (TES) Alumni Conference called, “Creating Inclusive Environments for Sexual Gender Minorities (SGM),” and in NCI’s Aspiring Leaders Program (ALP) session on Diversity. The impact of bringing Safe Zone directly to the NCI has had a meaningful and continuing effect in continuing the NCI and NIH efforts to promote equity, diversity, and inclusion.

It is for these reasons that Nicole Pérez is the award recipient for the 2019 Harvey J. Bullock Jr. Award for Equity, Diversity, and Inclusion.

In recognition for her devoted efforts to ensure that all NIH employees regardless of physical ability have the welcoming, supportive, respectful environment necessary for success.

Dr. Mann Koepke is a life-course developmental cognitive neuroscientist/psychologist, with a focus on the neurobiology of learning and cognitive development, and cognitive disabilities throughout the lifespan, in both animals and human populations. In addition to her primary role as a Program Officer reviewing grants for the National Institute of Child Health and Human Development’s Division of Extramural Research, she has served the in NICHD as the Director of the Math and Science Cognition, Reasoning & Learning – Development & Disorders Program within the Child Development and Behavior Branch since 2008, where she is dedicated to building the research base on the development of math and science cognition, reasoning, and learning, and providing an evidence base for interventions for individuals with learning disabilities in these areas.

Dr. Mann Koepke takes her passion and advocacy on behalf of persons with disabilities of all types to the communities she lives and works. From serving on local government advisory groups (e.g., Commissioner, Montgomery Country Commission for People with Disabilities), and creating innovative patient and family interventions to enhance real-world function (e.g., the multi-award-winning “Alzheimer Page”; created in 1990, the world’s first free interactive educational website for professional and family caregivers for persons with dementia), to founding “Working with MS” to promote solution-focused problem solving for persons working or wanting to return to work while living with Multiple Sclerosis (MS).

Dr. Mann Koepke founded the NIH “ABILITIES” Employee Resource Group (ERG) and listserv in 2017 with the mission to foster a welcoming, supportive, and respectful workplace that promotes the success for all NIH staff, regardless of ability or disability.

ABILITIES members have had the opportunity to learn about new systems and programs before they are launched (such as EDI’s Intellitrack System) and to participate as beta testers for new tools (e.g., a new program for blind users). ABILITIES members have represented NIH at DHHS diversity forums and meetings. ABILITIES has offered many opportunities for persons with disabilities to participate more fully at work. Dr. Mann Koepke is a tireless champion of the disabled community outside the ABILITIES ERG. She is a member of EDI’s Disability Engagement Committee and a member of NICHD’s Employee engagement committee (WE). Dr. Mann Koepke works towards breaking down barriers, fostering inclusion, and creating opportunities for persons with every ability level.

It is for these reasons that Dr. Kathy Mann Koepke is an award recipient for the 2019 Yvonne Maddox Thompson Award. 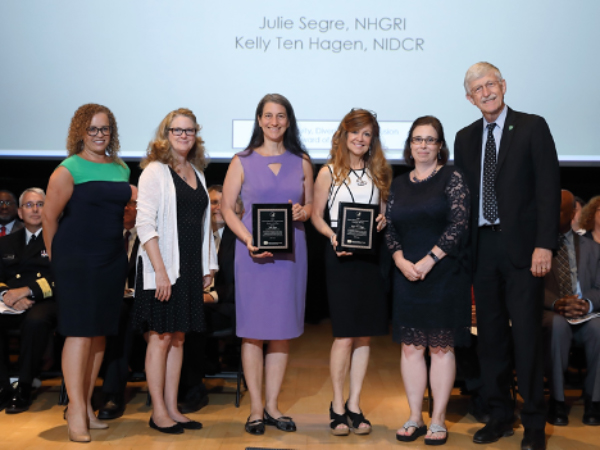 In recognition for efforts to help design and implement the NIH Anti-Harassment and Personal Relationships Policies and Workplace Climate and Harassment Survey.

Drs. Julia Segre and Kelly Ten Hagen have volunteered countless hours to help in the creation and implementation of the new NIH Anti-Harassment and Personal Relationships in the Workplace policies and the rollout of the Workplace Climate and Harassment Survey. They have worked closely in support of NIH leadership and several NIH offices, including Equity, Diversity, and Inclusion (EDI), Civil, Scientific Workforce Diversity, and the Office of Intramural Training and Education (OITE). They are articulate and forceful voices for change, and their collaborative approach to problem-solving has been invaluable. Their work to promote equity, diversity, and inclusion both at the NIH and within the broader biomedical research community complements their primary responsibilities as Senior Investigators in Intramural NHGRI and NIDCR where they conduct world-class scientific discovery.

In December 2017, at a pivotal meeting with Dr. Tabak and NIH leadership and various NIH stakeholders, Drs. Segre and Ten Hagen, representing the Women Scientists Advisors Executive Committee, described five features of an effective anti-harassment program: centralized reporting and investigation, a hotline, a clear policy on consensual relationships, protection of trainees and their career development and information escrow. All recommendations were subsequently adopted in the new policies.

The awardees serve on the NIH Policy Committee on Sexual Harassment, and since January 2018, on the steering committee tasked with overhauling the anti-harassment policy leading to its rollout in late 2018. Together with Dr. Deborah Hinton, WSA President, they briefed I/C Directors on the new policies. Both are appointees to the Advisory Committee to the NIH Director, Working Group on Changing the Culture to End Sexual Harassment (2019). They promote the new anti-harassment policy throughout the NIH, and Dr. Ten Hagen is featured in the widely viewed anti-harassment video. In February 2019, she addressed NIDCR Principal Investigators on the anti-harassment program and was a member of the trans-NIH task force responsible for the 2019 Workplace Climate and Harassment Survey.

Both work in other capacities to promote equity in the biomedical community. Dr. Segre serves as an inaugural member of the pan-I/C NIH Equity Committee reviewing resource allocation and is a mentor to the new NIH Distinguished Scholars Program that supports tenure-track investigators with a commitment to diversity. Dr. Ten Hagen is a founding member of the Women in Biochemistry and Molecular Biology group (2019) of the American Society of Biochemistry and Molecular Biology and has spoken on equity and diversity issues this past June at the 97th General Session of the International Association for Dental Research in Vancouver, BC, Canada.

It is for these reasons that Drs. Julie Segre and Kelly Ten Hagen are award recipients for the 2019 NIH EDI Award of the Year.