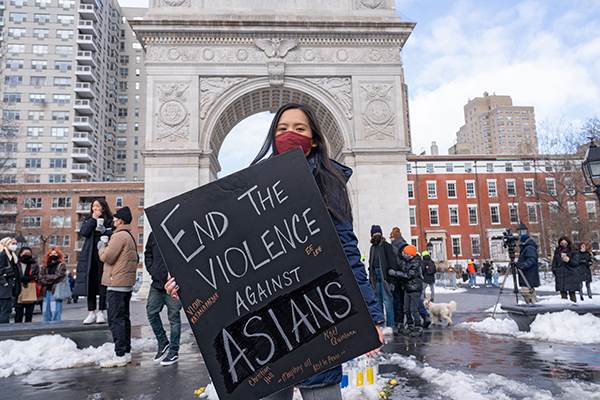 Caption: Protestor holds a sign at the End The Violence Towards Asians rally in Washington Square Park on February 20, 2021, in New York City.

In the wake of racist violence against Asian Americans and others of Asian descent, they deserve our affirmative acknowledgment and advocacy. We see you and the injustice you are experiencing; we stand with you! We must come to understand it is more relevant to acknowledge our fellow human beings during their time(s) of need than it is to distinguish one racialized group of people from the other irrelevantly—thereby rejecting the American racial caste system.

We are all members of the human family. We [all of us] must be bound by liberating principles of freedom, dignity, and respect while being guided by a moral compass that forever points toward justice. After all, a wise person once gifted us with a pledge to human-unity when he shared that, “Injustice anywhere is a threat to justice everywhere. We are caught in an inescapable network of mutuality, tied in a single garment of destiny. Whatever affects one directly affects all indirectly.” (Dr. Martin Luther King, Jr., Letter from the Birmingham Jail).

Racism = hate. We must redouble our efforts to eradicate hate! When the physical and mental health of one of us is under assault, as is the case here, the entire human family is under assault. Our Asian brothers and sisters are experiencing racially motivated physical assaults and harassment throughout the United States, and we have an opportunity and obligation to advocate with-and-for them. Stop AAPI Hate has chronicled those hateful and unjust assaults via news articles, reports & releases, as well as a means by which to report a hate incident. Additionally, Stop AAPI Hate provides resources to combating race-based hatred. The time is now to advance racial equity via advocacy.

We advocate by committing to lifelong learning to be increasingly effective in serving the human needs of all persons—holding the vision that we and our social institutions are instruments for creating a socially just democracy (Lindsey, 2009); we advocate by speaking up-and-out against hate and discrimination; we advocate by reporting hate and discrimination; we advocate by acknowledging and embracing our Asian brothers and sisters’ lived realities and rejecting “color-blind” explanations toward equality and embracing racial equity; and finally, we demand they been seen and accepted as human beings entitled to justice under law—not merely tolerated. We see you and the injustice you are experiencing; we stand with you!

EDI has provided resources for reporting discrimination/harassment at the National Institutes of Health.