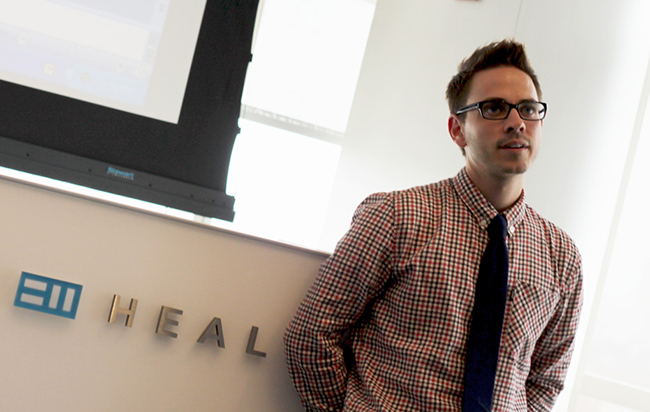 Dr. Christopher Wheldon, Cancer Prevention Fellow (CPF) of the National Cancer Institute (NCI) at the National Institutes of Health (NIH) is a change agent for the Sexual and Gender Minority (SGM) community as he is clearly devoted to understanding the unique health-related issues in the and is compassionate about intervening to increase quality of life and health outcomes in this population. This is evidenced by his strong research record both prior to joining the NIH as a CPF and during his time working at NCI.

Dr. Wheldon has taken full advantage of his time at the NIH to hone his research area and get directly involved with several NIH and NCI-related efforts to advance the research agenda for the SGM population. His efforts to help the SGM community do not end with his research and numerous publications; he is involved with several outreaches and translational efforts to ensure that the studies he leads are translated into interventions that will have a direct and meaningful impact on this population as he moves to his academic appointment.

Dr. Wheldon has utilized his time as a Cancer Prevention Fellow at the NCI to advance research for several critical areas in the SGM community including substance abuse, HPV awareness/uptake, and quality of care. One research area Dr. Wheldon has excelled in is tobacco use, where he has authored several epidemiological studies to provide population-based estimates of tobacco use among sexual minorities and to understand the role of their identity in tobacco-related information seeking and associated smoking behavior. Similarly, he conducted an analysis of trends in HPV-related awareness and knowledge over time and studied discourse in social media about HPV vaccination. These population-based studies are critical in providing the big picture to identify problems that need more research or interventions.

Seeing the big picture is important to Dr. Wheldon, and his research also extends to cancer care for SGMs to explicate what is "culturally competent care" for this population and to understand related health outcomes by doing a scoping review. His work also encompasses specific cancers with a focus on increasing quality of life. For example, he studied coping strategies and social support resources in lesbian/bisexual breast cancer survivors and is studying how to create a social marketing campaign to raise awareness about anal cancer among gay and bisexual men. He plans to continue this area of research and to focus on the quality of life issues among anal cancer survivors. He has also served on as a member of the trans-NIH Sexual and Gender Minority Research Office (SGMRO) committee helping to liaise between the Institutes and Centers (ICs) and the SGMRO and helping to review applications eligible for administrative supplements (PA-18-713). Lastly, Dr. Wheldon has demonstrated his leadership in SGM research by being involved with NIH-level efforts that have focused on defining and measuring SGM identity, and he led the effort to put gender and sexual orientation items on an NCI-led population-based survey, the Health Information National Trends Survey (HINTS). It's clear that through his basic and applied research and his efforts to increase the quality of life in the SGM community that Dr. Wheldon has shown true leadership in improving health outcomes for this vulnerable population.