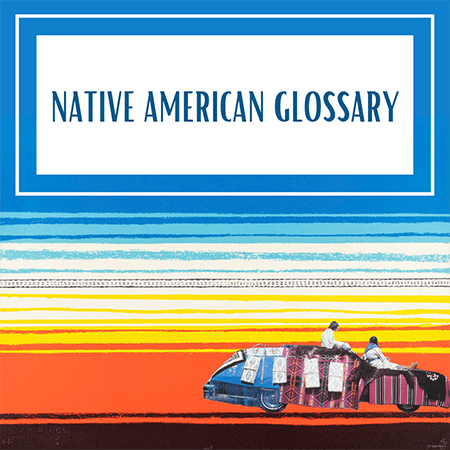 This glossary is a non-exhaustive list of terminology useful for discourse about Indigenous peoples and cultures. The following definitions were aggregated from several sources in the spirit of providing a broad spectrum of perspectives and a variety of potential resources on this topic.

Federal Recognized Tribe
A federally recognized tribe is an American Indian or Alaska Native tribal entity that is recognized as having a government-to-government relationship with the United States, with the responsibilities, powers, limitations, and obligations attached to that designation, and is eligible for funding and services from the Bureau of Indian Affairs.2

Generation Indigenous (Gen-I)
A cross-sector initiative launched by President Obama in 2014 to focus on strengthening resources for Native youth and building new platforms where they can share their voice, recognize one another, and inspire positive change. As part of the initiative, CNAY manages the National Native Youth Network of Gen-I. For more information about the Gen-I Network, visit www.cnay.org.3

Indian country vs. Indian reservation
A reservation is an area of land “reserved” by or for an Indian band, village, or tribe (tribes) to live on and use. Reservations were created by treaty, by congressional legislation, or by executive order. Since 1934, the Secretary of the Interior has had the responsibility of establishing new reservations or adding land to existing reservations.

Indian Reservation
In the United States there are three types of reserved federal lands: military, public, and Indian. A federal Indian reservation is an area of land reserved for a tribe or tribes under treaty or other agreement with the United States, executive order, or federal statute or administrative action as permanent tribal homelands, and where the federal government holds title to the land in trust on behalf of the tribe.5

Native Food Sovereignty
Native food sovereignty refers to the right of American Indians and Alaska Natives to produce their own traditional foods on their own lands to sustain their families and communities; it also addresses the underlying issues impacting Native peoples and their ability to respond to their own needs for healthy, culturally adapted Indigenous foods.7

Powwow Regalia
Powwow regalia is a powerful mode of self-expression that blends historical and modern dress. Worn with responsibility and pride, the clothing represents community traditions and personal tastes. A dancer’s powwow outfit is a collection of items that reflect their lives, interests, and family background. Many wear garments that are family heirlooms or gifts crafted by family members.8

Sacred Site
Traditional religious and ceremonial practices of Native Americans are often inseparably bound to specific areas of land. Many of these sacred places are located on what is now public land and Western concepts of resource development, such as logging, mining and tourism, may conflict with the integrity of these sacred places.9

Sovereignty
Sovereignty is a legal word for an ordinary concept—the authority to self-govern. Hundreds of treaties, along with the Supreme Court, the President, and Congress, have repeatedly affirmed that tribal nations retain their inherent powers of self-government. These treaties, executive orders, and laws have created a fundamental contract between tribes and the United States.10

Tribe
A social group composed chiefly of numerous families, clans, or generations having a shared ancestry and language.14

Trust and Treaty Obligation
A treaty is a contract, a binding and legal agreement, between two or more sovereign nations. By signing treaties with Indian tribes, the United States acknowledged tribal sovereign status. When the architects of the American government created the Constitution, they explicitly recognized that treaties are the supreme law of the land, along with the Constitution itself.15

The Aspen Institute compiled a comprehensive glossary based on the Center for Native American Youth 2019 report. Their glossary, titled Native Language: Modern Terms for Understanding Native America, is a great tool for readers hoping to gain additional understanding of common terms used to discuss issues pertaining to Native American communities. The Aspen Institute is a nonprofit organization based in Washington, DC. Its mission is to foster leadership based on enduring values and to provide a nonpartisan venue for dealing with critical issues.16 "The Center for Native American Youth (CNAY) at the Aspen Institute is a national education and advocacy organization that works alongside Native youth—ages 24 and under—on reservations, in rural villages and urban spaces across the country to improve their health, safety, and overall well- being."17