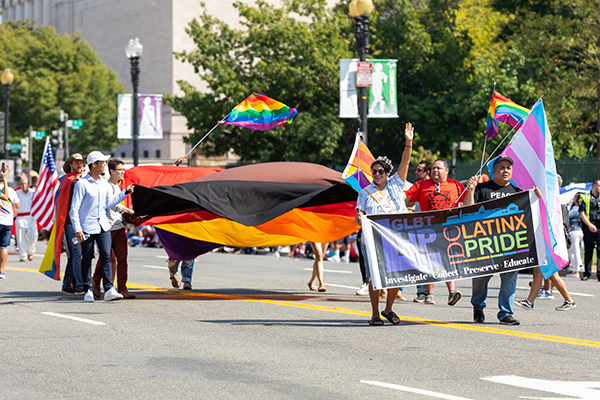 Bali is the Principal Strategist for the Sexual and Gender Minorities Portfolio within EDI. It is her role to gain a greater understanding of how the NIH workplace serves SGM employees; this work includes insights regarding recruitment, retention, and advancement, as well as efforts to increase SGM engagement and offer recommendations on current and future NIH policies and diversity and inclusion strategies.

With an academic background in cultural studies and languages as well as extensive professional experience in public health, Bali joined the NIH Academy in 2014 as an Intramural Research Training Awardee, assigned to the Office of Behavioral and Social Sciences Research. During that time, she presented research posters across the NIH, on Capitol Hill, and at the International AIDS Conference in South Africa regarding intersectional impacts on the health of African American women of transgender experience in NYC.

Dr. Erik J. Rodriquez is a biobehavioral epidemiologist and staff scientist in the Division of Intramural Research at the National Heart, Lung, and Blood Institute (NHLBI), where he conducts population health research in the Minority Health and Health Disparities Population Laboratory. He specializes in tobacco use behaviors, social determinants of health behaviors, and behavior-related health disparities among racial/ethnic minority and immigrant populations. His past research has investigated relationships between acculturation-, stress-, mental health-, and age-related factors and health behavior. His experience also includes research in the fields of premature mortality, occupational health, and applied public health.

Bali: Tell me about Latinx Pride. What’s it like?

Erik: Latinx Pride is a space for Latinx LGBTQ+ individuals to celebrate their intersectional LGBTQ+ and Latinx cultural identities. Several cities across the country hold, or have held, such events parallel to existing pride events. These spaces and events highlight individuals in the LGBTQ+ community who are often underrepresented and marginalized because of their ethnicity, language preferences, and immigration statuses.

Bali: What’s the significance of the use of the term Latinx?

Erik: The term Latinx first came about in the early 2000s. It is a US-based term that removes the grammatical gender of Latina (feminine) or Latino (masculine). This term is generally viewed as being more inclusive of non-binary gender identities and challenges the gender binary nature of language by introducing a gender-neutral term to the English language. LGBTQ+ individuals who speak other languages in other countries, such as those who speak Spanish in South America, use a similar gender-neutral term: Latine.

Bali: Do you remember the first time you attended/participated?

Erik: The first time I attended a Latinx Pride was in downtown Los Angeles about 20+ years ago. After years of not seeing any LGBTQ+ people who look like me in LGBTQ+ media and at LGBTQ+ events, to see other Latinx LGBTQ+ individuals felt validating and relieved some of my feelings of isolation.

Bali: How is it different from the traditional pride here in DC?

Erik: The main event of DC Latinx Pride is a dance party at a local venue that centers Latinx music, dancing, local performers, and Latinx LGBTQ+ organizations in addition to mainstream music and dancing that you would generally hear and see at a similar event. The organization that holds DC Latinx Pride, the Latinx History Project (LHP), also holds other Latinx LGBTQ+ events throughout the year.

Bali: We’ve discussed labels before. How do you identify?

Erik: I generally identify as a gay Latino. However, I don’t get too caught up in using the most precise label for myself. The labels I use are for others to quickly understand a few aspects of my identity, not for me on which to attach my self-worth or self-value.

Bali: How do you feel/experience/connect to the larger gay community?

Erik: Honestly, it can be a challenge. Much of the gay community in which I’ve grown up has been white, male, cisgender, privileged, and generally not interested in people who do not fit into those categories. So, much of the racism I have experienced over my life has come from the larger gay community. Some of that is changing as a few big-city pride events have recognized the importance of other movements such as the civil rights movement and Black Lives Matter, to the history and current efforts within the larger LGBTQ+ civil rights movement.

Bali: What has your experience been of the larger LGBTQ+ community as a Latino person who is also gay?

Erik: As I just mentioned, racism has been a frequent occurrence for me in big cities that don’t have a sizeable number of Latinx people. Other than that, early on, I didn’t realize or appreciate just how broad the LGBTQ+ community was and how many people it included. I’ve been able to change this through my volunteer work with a local Latinx LGBTQ+ civil rights group. Through them, I have been connected to other Latinx organizations and met Latinx individuals who are trans, two-spirit, non-binary, Afro-Latinx LGBTQ+, and disabled LGBTQ+.

Bali: What have your experiences been as a Latinx, LGBTQ+ scientist here at the NIH?

Erik: As a Latino LGBTQ+ individual at the NIH, the treatment I’ve received has been mostly acceptable. That said, I have had negative experiences in regards to both. I don’t think they have been intentional, but that certainly doesn’t make them acceptable. The one thing that I think allows for such negative experiences at the NIH is the silence around talking about LGBTQ+ individuals, their existence and experiences, as well as the woeful underrepresentation of Latinas/os at the NIH, which currently sits at 4% when Latinas/os are 18.7% of the U.S. population.1 These aspects of NIH culture are the most negative of my experience at the NIH overall.

Bali: What are some upcoming events we can participate in as members of the LGBTQ+ and Latinx communities?

Erik: Because of the pandemic and other factors, this year’s DC Latinx Pride will be on Friday, October 15, 9:00 pm – 2:00 am ET at The Howard Theatre. This and other Latinx LGBTQ+ events held by LHP can be found on their Facebook page.