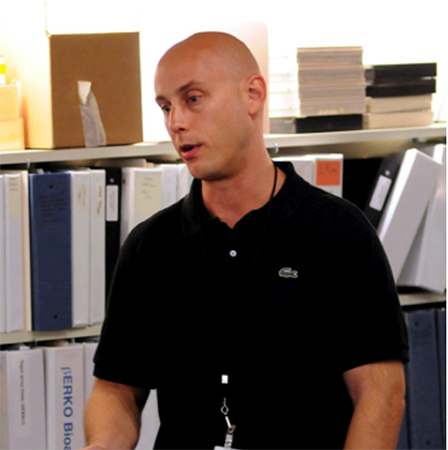 On any given morning, NIH Public Affairs Specialist Ian Thomas can be found in his office, typing away at his computer just like anyone else. Upon closer review of his screen, however, some are surprised by its contents — specifically their size.

Thomas, a longtime sports writer and radio disc jockey, has a form of legal blindness known as Retinitis Pigmentosa, and thus uses an assortment of screen magnifiers and speech readers to assist him in doing his job.

“Yeah, sometimes I feel like a bit of a pack mule,” Thomas joked of the myriad devices and gadgets that fill his desk and backpack. “Seriously though, I’m extremely blessed to live in a day and age where assistive technology is so advanced. It really is the great equalizer for people like me.”

A master’s graduate of Florida State University, Thomas joined the Office of Communication and Public Liaison (OCPL) for NIH’s National Institute of Environmental Health Sciences (NIEHS) in 2011; he is a regular contributor to the NIEHS’ newsletter, the Environmental Factor and the voice behind many of its videos on YouTube. He joined NIEHS OCPL through the Schedule A hiring initiative — a revolutionary program designed to promote federal hiring of those with disabilities.

“Schedule A was fantastic because it gave me a gateway into the Federal system that I wouldn’t have otherwise had,” said Thomas, “From there it was a matter of putting my resume front and center, and allowing my credentials to speak for themselves.”

Still, Thomas admits that while programs like Schedule A and the Job Accommodation Network are a great way to get candidates with disabilities through the door, they’re only the first step toward long-term success for everyone involved.