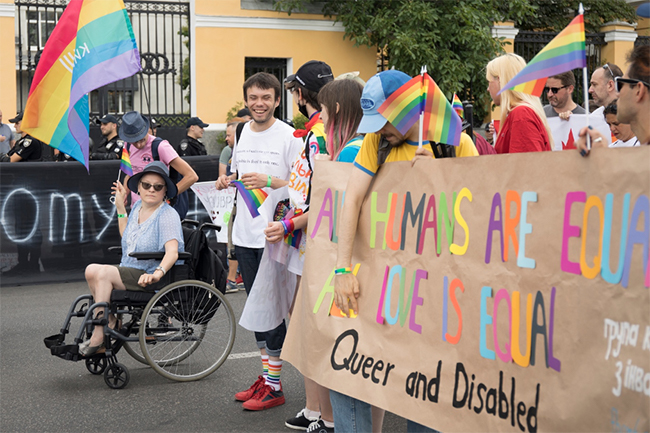 Pride Month is celebrated to honor the 1969 Stonewall Uprising as a tipping point for the Gay Liberation Movement in the United States and to recognize the contributions and impacts that lesbian, gay, bisexual, and transgender individuals have had on history. The Sexual and Gender Minority (SGM)* community is diverse in age, sex, race, ethnicity, and sexual orientation.

A subset of the community rarely highlighted is SGM persons with disabilities. Just as the disability community intersects with other minority groups, the SGM community is no exception. One in four transgender adults report living with a disability in the United States1, while one in four lesbian, gay, and bisexual adults in California reports living with a disability2. SGM persons with disabilities find themselves at the intersection of two vulnerable populations that are often subject to social stigmas and as a result experience greater disparity in areas such as income inequality, access to healthcare, and employment inequality.

Another barrier the community faces is that of intersectional invisibility. As an individual holding multiple marginalized identities, there is often a failure to fully recognize persons with intersecting identities, as they do not fit the exact prototypes of their respective identity groups. By recognizing and celebrating the differences within the SGM community, we respect the unique background and experiences of its members, creating a more inclusive environment for SGM persons with disabilities.

*"Sexual and gender minority" (SGM) is an umbrella term that encompasses lesbian, gay, bisexual, and transgender populations as well as those whose sexual orientation, gender identity, and expressions, or reproductive development varies from traditional, societal, cultural, or physiological norms. This includes Disorders or Differences of Sex Development (DSD), sometimes known as intersex.