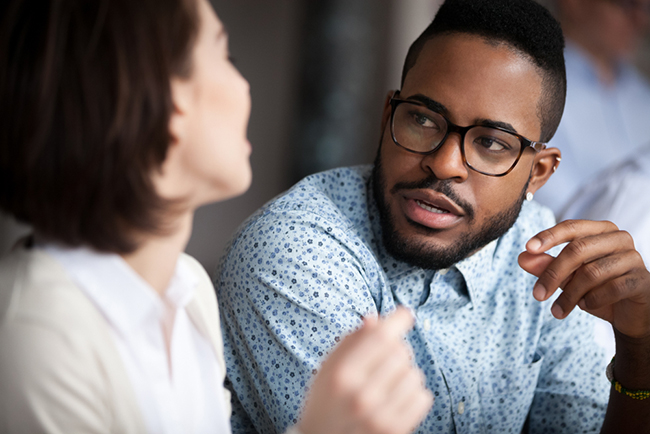 Have you ever thought about the stereotypes of your identity? Maybe that scientists aren’t empathetic or that all administrative assistants are impeccably well organized? Have you ever felt that you either can’t overcome a stereotype or won’t live up to it?

In your professional life, have you ever felt limited by the group identities available to you? Perhaps the professional association for clinical oncology nurses doesn’t necessarily take into consideration your experience as a man in a female dominated field.

To deepen our understanding of intersectionality, we will explore how our overlapping identities can influence our visibility in the workplace and how we can cope with stereotypes.

Those of us in underrepresented groups face conflicting problems resulting from our multiple identities. Due to limited representation in the workplace, some groups are simultaneously highly visible in our organization, yet cognitively invisible to leadership, leading to a lack of professional advancement, a phenomenon called intersectional invisibility (Smith, Watkins, Ladge, & Carlton, 2018).

Compartmentalizing or even concealing our identities in the workplace can cause us to be hidden in plain sight. There may be support for one of our identities, like our race or gender, or another identity, like our position as a management analyst, but rarely are these identities simultaneously supported (Purdie-Vaughns & Eibach, 2008).

Research shows that highlighting certain stereotypes can affect our performance, even when the stereotypes of our multiple identities contradict each other (Shih, Pittinsky, & Ambady, 1999). To test this theory, researchers at Harvard University gave Asian women a math test and placed them in three groups: one group highlighting their race, one group highlighting their gender, and one control group that did not highlight either identity. The participants who thought about their race before taking the test scored higher than the control group. The seemingly positive stereotype caused these participants to perform well.

The participants who thought about their gender scored lower than the control group, which is described as a stereotype threat (Steele, 1997). In some cases, like in the above research, we underperform because we are anxious about confirming negative stereotypical assumptions. When our mental energy is spent focusing on our anxieties about stereotypes, we don’t have enough mental energy left over to perform the tasks successfully.

What can I do about this?

There are a few methods that can reduce the effects of stereotype threat and intersectional invisibility. Treating our intelligence like a muscle that grows with effort will help develop a growth mindset (Walton, Cohen, & Steele, 2012). A person with a growth mindset will not allow stereotypes to affect his or her performance but instead focus on accomplishing tasks to the best of their ability. Leaders can also affect stereotype threat by expressing high expectations of their staff and communicating clearly that you believe your employees can and will meet those high expectations.

A group of corporate executives who self-identify as being affected by intersectional invisibility give the following advice: develop a keen awareness of your own unique position within your organization (Smith, Watkins, Ladge, & Carlton, 2018). Through this awareness, you can explore ways to bring your whole and authentic self to work, like sharing your true self with others at work and building meaningful relationships with your colleagues.