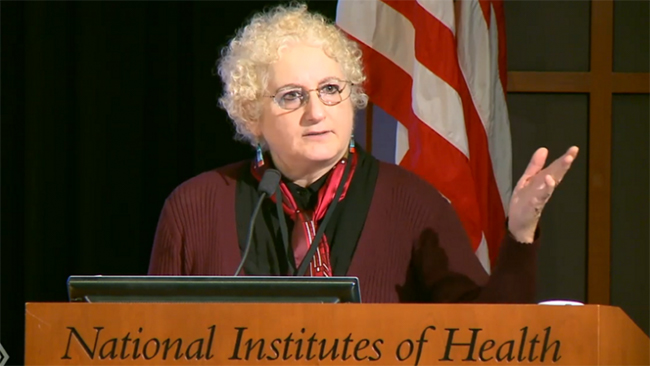 Dr. Symma Finn serves as Program Director for the National Institutes of Health (NIH)-Environmental Protection Agency (EPA) Centers of Excellence for Health Disparities Research and oversees outreach and dissemination activities for the Breast Cancer and the Environment Research Program. Dr. Finn is the National Institute of Environmental Health Sciences (NIEHS) point of contact for Tribal research and serves on a number of NIH and trans-federal committees related to Traditional Ecological Knowledge (TEK), environmental justice and social scientific research.

We asked Dr. FInna to share her thoughts on working at the NIH and what diversity in science means.

My work with rare disease patients led to an interest in bioethical issues related to genomic data sharing. NIH was leading discussions on that topic in the 1990s and I was eager to participate in the development of policy, and the oversight of research, that also took a humanistic approach regarding the interests and needs of research participants. I, therefore, accepted an American Association for the Advancement of Science (AAAS) Policy Fellowship at the NIH.

What inspired you as a social scientist to work with biomedical and environmental health scientists?

One of my first research administration jobs was at a marine science graduate school, which included a program in the social sciences relevant to marine science (anthropology of coastal communities, marine archaeology, ocean, and coastal law and economics). This was a program that was well integrated with the marine science departments, and in particular with research on ecosystem management. This led to my understanding of the value of humanizing research, and promoting the inclusion of the point of view of research participants in the research process, and employing anthropological skills to interact with a variety of stakeholders. I received my Masters at that school and later obtained a doctorate in medical anthropology based on my research on rare disease patients. There too, the value of transdisciplinary social and biomedical research was very apparent.

Why is diversity important for science?

Scientists have come to understand the importance of personalizing medical treatments based on the fact that people from different racial and ethnic backgrounds and socioeconomic status, among other attributes, react differently to biomedical and behavioral interventions. It is therefore extremely important for both research participants AND the scientists who conduct research, to represent the diversity of the US population. We will not understand the impact of disease risks or disease progression, without taking into account the diversity of response. And, diversifying the scientific workforce allows for optimal engagement with research participants and ensures cultural appropriateness in research protocols.

Can you share a mentoring success story from your career at the NIH?

The mentoring relationships I’ve been involved in often continue for many years and in most cases have been mutually beneficial. One of my greatest mentoring success stories, for example, has been ongoing for 7 years. It began in 2012 when I invited a well-educated and very articulate Navajo student to participate in an NIEHS tribal research webinar. Her work bridges Western scientific approaches with TEK to tackle water quality issues on tribal lands. She taught me about TEK and I provided feedback to assist her with her initial efforts at submitting grants. We stayed in touch and I continued to mentor her as she finished her doctorate and provided a strong letter of support for her application for a position at a prestigious academic institution. She is now an assistant professor in the school’s Native North American Indigenous Knowledge initiative, which intends to raise the level of discourse about Native American communities’ knowledge while maintaining the highest respect for tribal rights. I am proud to have played a small part in her academic achievements but truly feel that it was her drive and dedication that got her to her current position. And believe that I learned as much from her as she benefitted from my input to her career path and research interests.

How were you inspired to work with tribal communities?

The NIEHS maintains a large network of grantees involved in environmental public health. This network, the Partnerships for Environmental Public Health, holds annual meetings, and in 2013 the meeting theme was Environmental Health Disparities and Environmental Justice (EJ). I attended several sessions focused on Native American issues and at the end of one of these sessions, the moderator called for recommendations. One of the participants, a member of the Navajo Nation, jumped out and exclaimed loudly that he had been coming to EJ meetings for 20 years, and at each meeting they had developed recommendations for action. “When are we going to DO SOMETHING about these issues?” he shouted. And at that moment, I experienced an epiphany – I felt like an arrow had pierced my heart and from that moment on, it became my mission to “do something” about Tribal health equities. Since that time, and with the full support of leadership at NIEHS, I was able to work closely with Tribal investigators and community members and have met many people who continue to inspire me with the need to “do something” and actually address some of the pressing environmental health disparities experienced in Tribal communities and on Tribal lands.

What are some best practices to attract and retain American Indians/Alaska Natives (AI/AN) talent?

As an anthropologist, my answer to this question is about how one approaches and interacts with individuals. I believe that when one approaches people with openness, is aware of what is culturally appropriate, and treats those from different backgrounds with respect, that this will attract and retain AI talent to the NIH. I also talk to many people about how great it is to work here, which I think is helpful for potential job applicants. However, the most important thing to do to retain AI/AN talent, is to make sure to connect new employees to others from the same background whether at NIH or other federal agencies; to provide social activities especially in the beginning; and to make sure they have the resources and local support to acculturate themselves to the DC area (it is hard sometimes for those who grow up in cities to understand the culture shock that those from remote reservations experience when coming for the first time to DC).