Black Hair and an Unjust Society

Black Hair and an Unjust Society 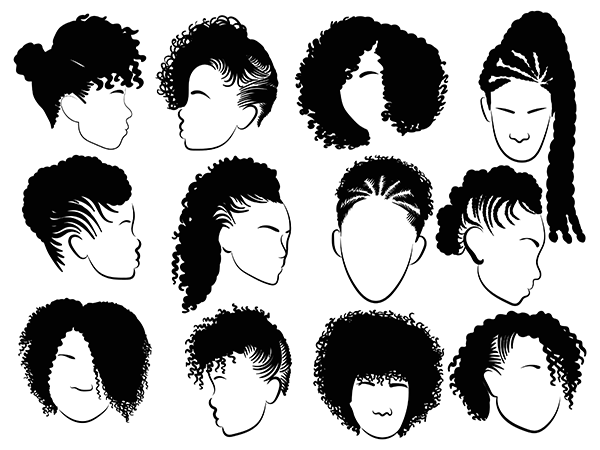 For many years, African Americans have been subjected to discrimination based on both hairstyles and hair texture. Still prevalent today, social injustice related to hair has existed for years within communities of African descent. While recent examples of this are being highlighted in the news, this is not a new concept. Afro hair texture has been called ugly by members of all ethnicities. As far back as the slave trade, Africans were forced to abandon their links and connections to their natural hair. Slaves were forced to shave their heads not only for issues related to lice contracted from the cramped, filthy, and inhumane quarters of the slave ships but also to strip them from any cultural identity or tribal heritage associated with hairstyles. After shaving the "bad" hair, Black men and women often were forced to wear headscarves to hide their hair from the sight of the slave owner. In the early 1700s, Louisiana Creole1 women had to wear a Tignon2 by order of the Tigon law3 for the simple reason of marking inferiority among Louisiana women of African descent. Creole women, often referred to as a mulatto4, were very light-skinned, and their hair texture did not resemble hair typical to women of African descent. Therefore, creole women had to wear head dressing to identify them as African descendants.

Historian Virginia M. Gould notes that the Governor hoped the law would control women "who had become too light-skinned or who dressed too elegantly, or who, in reality, competed too freely with white women for status and thus threatened the social order. "A Chaos of Iniquity and Discord: Slave and Free Women of Color in the Spanish Ports of New Orleans, Mobile, and Pensacola." The Devil's Lane: Sex and Race in the Early South (1997): 232-246, at p. 2

Today, it is still legal to discriminate against a person in the workplace or schools because of their natural hair. Although Title VII of the Civil Rights Act, which passed in 1964, explicitly prohibits workplace discrimination based on race and other protected categories, the many aspects of race discrimination were left to the courts to interpret. There are no existing Federal Laws that protect against this type of race-based discrimination.

In 1970, Beverly Jenkins, a Black female, was denied a promotion from her employer, Blue Cross, by her White supervisor, specifically because of her Afro5. Her supervisor indicated that she could never represent the company because of her Afro. (Jenkins v. Blue Cross Mut. Hops. Ins., Inc., 538 F.2d 164, 167 (7th Cir. 1976)). Federal Courts determined in this case that afros were protected by Title VII of the Civil Rights Act of 1964; however, despite this case, federal courts continue to exclude protections against hair discrimination, often citing that it is considered a characteristic that can be changed. This notion alone—requiring Blacks to change their hairstyles to be accepted in the workplace—perpetuates that Eurocentric features are the societal norm, such that they avoid scrutiny. At the same time, it disregards and devalues the natural, culturally inspired hairstyles associated with Black people and Black culture.

Since then, there have been several high-profile cases of hair discrimination.

Hair discrimination remains a problem for Black people throughout this country. It is still legal to discriminate against an individual's hairstyle and texture in the U.S. except for - California, New York, New Jersey, Virginia, Colorado, and Washington. Fortunately, the CROWN Act looks to correct this by making hair discrimination illegal.

The CROWN Act prohibits discrimination based on hairstyle and hair texture. The CROWN ACT stands for "Create a Respectful and Open World for Natural Hair."

It was first introduced in California in January 2019, then expanded the definition of race in the Fair Employment and Housing Act (FEHA) and Education Code to ensure protection in workplaces and K-12 public and charter schools. The inaugural CROWN Act was signed into law by Governor Newsom in California on July 3, 2019 and went into effect on January 1, 2020. New York was the second state to introduce the CROWN Act, with Governor Cuomo signing the CROWN Act into law on July 12, 2019, deeming the legislation effective immediately. New Jersey became the third state to enact the CROWN Act as Governor Phil Murphy signed the CROWN Act into law on December 19, 2019, the first anniversary of the wrestling match where New Jersey high school wrestler Andrew Johnson's locs were forcibly cut off (see reference above). Virginia and Colorado became the fourth and fifth states to enact the CROWN Act. Virginia Governor Northam signed the bill into law on March 4, 2020, while Colorado Governor Jared Polis officially signed the bill into law on March 6, 2020. Washington State Governor Jay Inslee signed the CROWN Act on March 19, 2020. The city of Cincinnati, Ohio and Montgomery County, MD, has also passed The CROWN Act in those local and county municipalities, respectively.

On December 5, 2020, Senator Cory Booker (D-NJ) and Congressman Cedric Richmond (D-LA) introduced The CROWN Act of 2019 in both chambers of U.S. Congress, paving the way for federal protections. To date, seven states have laws and over 20 states are considering the CROWN Act. They have either pre-filed, filed, or formally stated an intent to introduce their own anti-hair discrimination bills.

For more information or the latest updates on this topic visit the CROWN Act web site.