Anatomy of a Black Woman: My Body is Beautiful

Anatomy of a Black Woman: My Body is Beautiful 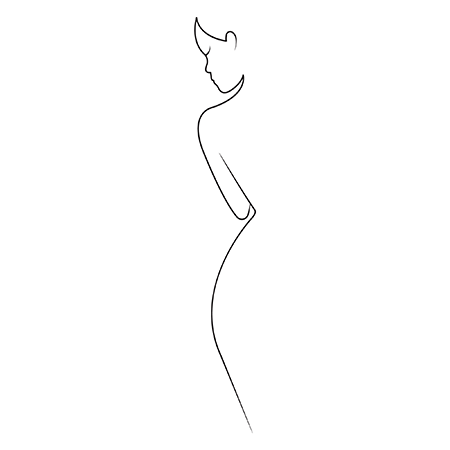 For centuries, White culture has decided what is perceived as the ideal body image for women. In most instances, the perfect body was the opposite of the shape of a Black woman. The Black woman’s curvaceous body was defined as obese or masculine. Black women were presented as “Mammie” types, unattractive, overweight, and unfit for anything more than physical labor or wearing a handkerchief and smiling on a pancake box. Exaggerated depictions, like that of a bent-over Black woman with a large buttock, were the representation of all Black women. Hence, Black women were subjected to body shaming for centuries.

Growing up in Montgomery County, Maryland, in a school system deprived of diversity, I attended predominately White populated schools.

There, I endured constant bullying in the form of body shaming by White staff and students. While incredibly petite, I was cursed (blessed) with an extremely curvaceous body that was ripe for ridicule by my White classmates and teachers.

Employing this “other” form of racism, they often subjected me to teasing and bullying from as early as Elementary school. I experienced self-objectification, which culminated in me internalizing their perspective of me. I was uncomfortable and often wore large clothes to conceal the curves of my body. While I never received this ridicule from my Black friends or family, there was still this sense of shame when in large settings or public spaces. Perfect bodies in all forms of societal culture were never exhibited as curvy. They were skinny, no curves, virtually shapeless, and White. I often felt as if someone was always judging my curves, and for most of my formative years, I did not embrace my curves—my beauty—me.

Naturally, as I matured, I realized that among my people, we loved the big buttocks and thick thighs. It was during this time the media began to display beautiful curvaceous Black women. My insecurities vanished; my confidence was high, and I not only embraced my body image but also flaunted it. While curves were not yet welcomed as beautiful, they appeared to no longer be placed in the ugly category either.

It wasn't until the late 1990s that I was again exposed to what I call “curvy body-shaming.” I recall working for a Federal Government Agency. I stood in front of a group of employees conducting training on discrimination in the workplace for the Florida area offices. It was the instructor's practice to review the course evaluations daily when the training had concluded. The purpose was to look for ways to improve the next day's training or answer unresolved questions. There—in the middle of the course evaluation—was a comment about my outfit. The evaluator, who identified himself as a male, wrote remarks regarding my lower body curves and how the outfit (pants and blazer) was inappropriate.

Right then and there, all my primary years' insecurities hit me. Now, while I was all grown up, very secure in myself and my body, it was hard to prevent my past from hijacking my emotions. Bearing in mind the group of employees [trainees] were predominantly White, it was astonishing that an employee attending training on discrimination found it imperative to speak on his dislike of my outfit and how it hugged my body, plus thinking that my body type was so offensive. For those who are not aware, when you have a full buttock and thick thighs, EVERYTHING hugs your body, no matter what size you buy. Therefore, I had no control over how my clothes hugged my body. Such comments are not only devastating, but they are also destructive to an individual's self-image as a Black woman. These destructive behaviors have lifelong implications. At this point in my life, I handled these situations a bit differently, as these situations tend to fuel a fire. I went to the store immediately and bought something more form-fitting for the 2nd day of class just because I loved my curves. I stood in front of the class, and I thanked them for the shopping area. This allowed me to flaunt my new outfit and my curves.

More recently, in the 2000s, women are still trying to achieve the "ideal" body as outlined and determined by societal norms. Yet, the idea of an ideal or beautiful body has drastically changed. A cultural appropriation has taken place. What was once hideous and appalling is now the body goal that many aspire to attain. In the year 2007, Kim Kardashian hit the entertainment scene with beautiful and enlarged buttocks. As a result, big buttocks were the latest and greatest in the fashion industry. Plastic surgeons were in high demand for implants and lifts. Big buttocks were now sexy. Black media and culture continued to love them; media overall liked them, but not always on Black women. Ironically, the attributes which were once hideous were now sexy, but only on a selected race, not for the culture with which they originally existed, Blacks.

In 2012, I was presenting training to a group of managers with several colleagues at yet another Federal Government Agency. One of my colleagues was wearing a red dress. In a shocking reminiscent situation, we were reviewing the class evaluations. Once again, a specific comment was written (although not known if it was a man or woman), about my colleague's curves and, in particular, to the appearance in her beautiful red dress. Reading that class assessment infuriated me because I know all too well the feeling of hopelessness when people shame you for your natural and beautiful body images. The feeling of powerlessness and hurt is indescribable. After that, I intentionally bought several form-fitting red dresses, and I proudly wore them when conducting training.

Interestingly, in 2017, I read an article about an African American female news reporter in Dallas, TX – Demetria Obilor. She was criticized in a social media post for the way she looked in her dress. The comment was, "She's a 16/18 woman in a size six dress and looks ridiculous." The woman in the post also said that she was going to stop watching the news channel. The beautiful image of Demetria Obilor against the horrific post message, once again denigrating a Black woman's body, displayed her in a beautiful red dress. Red dresses now have an incredibly special meaning to me. I feel empowered wearing them.

These days, after a lifetime of ridicule and shaming for my big buttocks, the world finally loves them on most women. However, we are faced with a much different issue of extreme cultural appropriation. The ultimate disrespect happened while on a road trip with friends in 2019. We stopped by a rest stop for coffee and snacks. While standing in the Starbucks line, a White female approached me and asked, "Excuse me, where did you have your butt done, it looks so natural, and I am looking for a good butt doctor."

The cultural elements of the curvaceous Black woman, from her buttocks to her thighs, which we were initially taught to hate, went from revolting to sexy, to stolen. Now they are being lost or distorted and removed from their originating cultural contexts. The assumption that a Black woman had her "butt done" displays disrespect or even a form of desecration. The assumption is that Black women’s beauty can only be procured [by White America], as opposed to being as natural as our brown skin.

At what point can my big buttocks and thick thighs be okay being natural, Black, and beautiful? Now!