July 5, 2016
By:
Ben Chambers, Chief of Multimedia Strategy for the NIH IRP 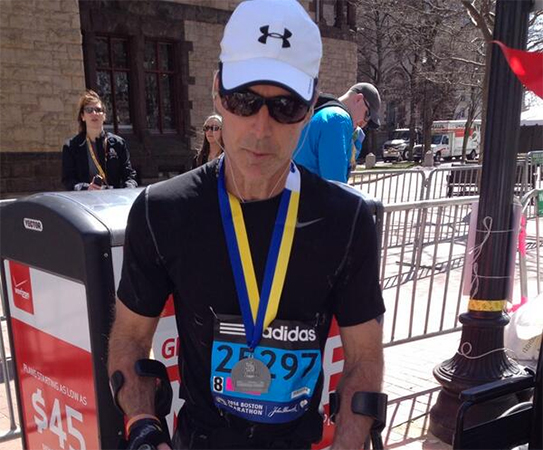 This article was originally published on the I am Intramural blog by Ben Chambers, Chief of Multimedia Strategy for the NIH IRP.

Nine days after the monstrous 2016 blizzard nicknamed Snowzilla, the sun shone in a bright blue sky on a balmy 50-degree day at the main NIH campus in Bethesda, Maryland—the perfect setting for a four-mile run with two men who’ve logged nearly a thousand miles together.

It was Larry Chloupek’s last day at work before retiring, and he wanted to be sure to get one more run in with his longtime trail partner, Darryl Murray. Larry had invited me on their runs before, but I had never stepped up to the challenge. Today was my last chance.

“This is our favorite little route,” Larry says, as we make our way over the little creek bridge leading to the campus perimeter. “I don’t know how many times, over a hundred easily, that we have done this together.”

Larry is the Management Liaison Director at the NIH, in the Office of Intramural Research (OIR). People describe him as a natural “connector” perfectly suited for his role making sure that administrative processes fit the needs of thousands of IRP scientists and clinicians who conduct biomedical research. After 33 years of government service, 25 at the NIH, he is relocating to Arizona with his wife, Jenn.

“One of my bucket list items is hitting all 50 states,” Larry says. “It won’t be this year, but next year, I want to take an RV for about six weeks, a small one, and go up the California coast and the Northwest and see that part of the country and go to all those national parks. This year it’s going to be the Midwest.”

Larry’s government career began at USDA, then OPM, followed by an NIH position in human resources at the National Cancer Institute, leading to an administrative officer role. In October 2008, he joined the OIR under Dr. Michael Gottesman’s leadership, where he has been the liaison, with his administrative knowledge, to the Scientific Directors, and helped inform the administrative community about how what’s happening in the scientific community is going to affect implementing and overseeing day-to-day operations of the intramural research programs.

“I get to hear him through the wall, that’s all,” says Darryl, NIH Undergraduate Scholarship Program (UGSP) Director. “Our actual jobs never really intersect. But we do have a common thread in that I think we both spend a lot of time mentoring people. I often see junior employees in his office, and he’s sharing his experiences and advice with them.”

Part of Larry’s job involved representing OIR on various committees, working with leadership of the Intramural Administrative Management Council (IAMC), putting together monthly meetings for the principal administrative officers within NIH, and developing a number of different classes for the administrative community on such topics as Title 42, risk management, space utilization, and the NIH budget process.

“One program in particular that I’ve really been proud of is a partnership that we started three years ago with the Department of Veterans Affairs,” Larry says. “It’s a program called the W2W, the Warriors to Workforce, where we get 30 percent or more disabled vets who come here as interns, as GS-5, and we train them. It’s a three-year training program to become contract specialists, so by the time they finish up, after three years of intense classroom training and on-the-job training, they are GS-11 contract specialists. And that’s a great need that we have at NIH, to bring in competent contract specialists.”

“My schedule’s been pretty hectic over the years, but it’s been just a great education for me and great opportunity to meet a cross section of individuals throughout NIH,” Larry says.

At the two-mile mark of our jaunt up the Bethesda Trolley Trail, we paused for an all too brief moment to enjoy the sunshine and fresh air. Once a week on average over the past six years, Darryl and Larry have run three to four miles—that’s more than 1,000 miles of conversation, with various coworkers tagging along at times.

“There are some memorable runs,” Darryl says. “And most of them are in extreme weather, whether it be around 100 degrees in the summer or below freezing in the winter. When we go on these runs, we’re usually shooting the breeze or talking about what’s going on in our lives. So he’s also been a person who’s not just been reliable to go on a run with, but someone I can sort of share things with as well.”
A couple of years before Larry joined the OIR and moved into Building 2, Darryl had torn his ACL and wasn’t running as regularly as he would have liked. But that quickly changed.

“I remember seeing him go out to run and coming by and asking me if I want to come out and join him,” Darryl recalls the days shortly after Larry’s arrival. “So it was a real asset to have him there and have someone come by and say, ‘Ok, let’s go out and run.’ He really helped get me back into consistency, so I’d get back into shape. And I expect to get emails in his retirement, asking whether I got my run in, on a Tuesday or a Thursday especially. Oh yeah, it’ll happen.” Darryl and many others in the OIR and across NIH Institutes and Centers will miss Larry—we already do.

“I’ve loved my experience here,” Larry says. “I’ve loved the people who I’ve met over the years. I’ve developed some awesome relationships, some awesome friendships with people here that I’ve maintained, that I will continue to maintain even into retirement.”
We wish you all the best in life, Larry! Have an awesome retirement. 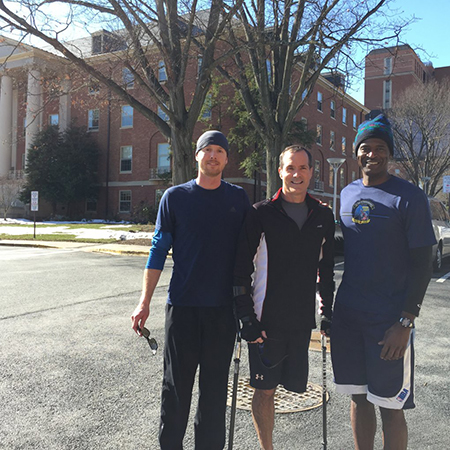